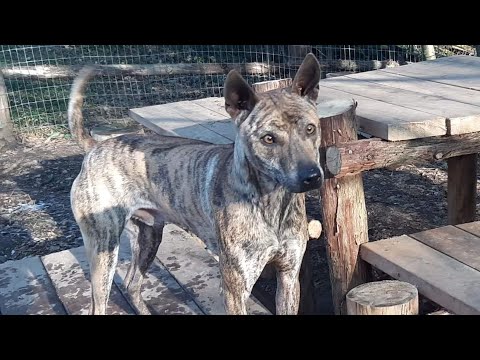 World's rarest dog breed!!! First litter in Canada Ever!!!! Super exciting. Update Feb 12 10 weeks old and ready to go!- Only 2 left. Egypt a beautiful Tiger Brindle girl like her mom (shown in the picture the lighter Tiger Brindle and Sapphire a fawn female who will look a bit like a Dingo when she is older - I attached a similar picture of a similar looking Phu Quoc Ridgeback - aka Vietnamese Ridgeback. I have included an example of an adult that will look like her. Phone calls are best if you are serious, then can talk easier. 226-751-3647. To learn about this breed I attached a video. The first few minutes of the video are not on the Phu Quoc, you must scroll in and start watching from there. Vietnamese Ridgeback, called Phu Quoc Ridgeback. A rare ancient dog breed from Vietnam, descendants of Dingos. Extreme athletic ability, can swim very well and catch fish, can climb trees. Fascinating primitive ancient breed. Curious character, intelligent, can listen to owner's commands. Usually good with other dogs, lives very well with other dogs. Social nature with people once socialized well. Curious, intelligent personality, social nature typically, playful character, some may be more shy due to primitive nature, some may be more loyal and watchful, some more playful/curious. Different prices for different colour pattern. Fawn is not expensive, Tiger Brindle is expensive.